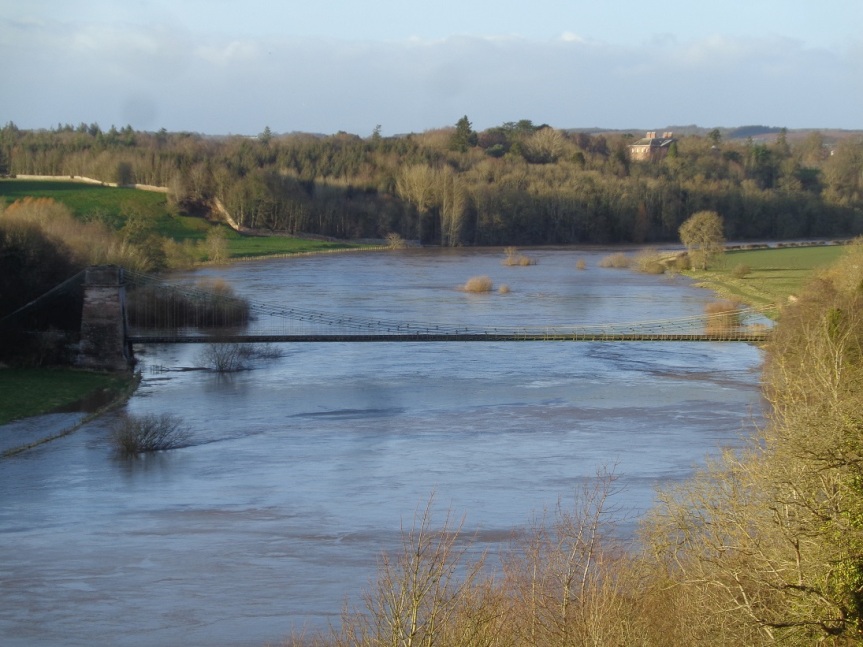 On the way home from Newcastle we took advantage of a gap in between the storms to visit the Union Bridge over the Tweed near Paxton, which I’d really been meaning to visit ever since the Collingwood Society went to Paxton House a few years ago.

This is a bridge with a sneaky claim to fame – technically the first suspension bridge open to traffic, it was started when the Menai Straits bridge was already being built, but finished first just because it’s on so much smaller a scale.

We came to it from the English side, where you get a beautiful view from above as you approach down a slope – this end is more or less built into the local rock, as well as out of it.

The bridge crosses the border, and the decoration here shows the rose and thistle entwined, with the words ‘Vis Unita Fortior’ – United Strength is Stronger – obviously patriotic, but also with a local meaning, because it made movement much easier than relying on a sometimes difficult ford, or the bridges at Coldstream or Berwick, both more than 10 miles away.

We really felt the bridge move as we walked over it – although the sun was shining it was still very windy.

The two ends of the bridge are quite different – the English end anchored in rock, while the Scottish end has a more traditional tower, with the chains running on behind.

The site of the bridge is slightly different from the site of the ford it replaced, and was chosen to keep the bridge well above the winter floods – the Tweed was certainly flowing high and broad when we were there, but not so high that it came close to the bridge.

The history of the bridge is slightly odd, as its designer doesn’t seem to have started out with any particular idea of building a bridge – he was a naval captain called Samuel Brown who was trying to come up with an alternative to enormously thick ropes for ships’ rigging and cables, and produced iron chains to be used. As rigging it never caught on, but the Admiralty did fit out ships with mooring cables made from his chains.

At some point it just seems to have occurred to him that the chains could also be used for a bridge – it was an idea that was around at the time, of course – but no one seems very sure how he became involved with this bridge in particular.

The piers of the bridge, however, were designed by John Rennie, who had the experience with masonry which Captain Brown lacked.