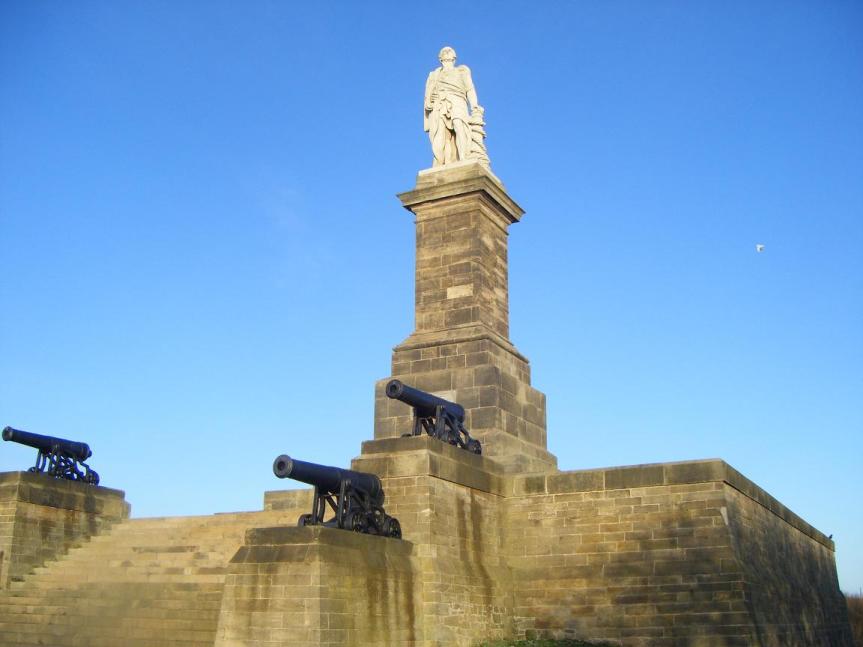 For all my writing about monuments, I never seem to have got round to what for me is *the* monument – Collingwood at Tynemouth. I don’t visit as often as I once did – I don’t end up in Newcastle by myself as much – but I try to get down for Trafalgar Day when I can, and it’s still a nice place to go.

These pictures are from the first time I ever visited, in December 2009 – you can tell that by the amount of frost on the ground!

As it says on the inscription, the monument was erected in 1845 – 35 years after Collingwood’s death. So on the one hand they were in no hurry, but on the other he was obviously still remembered and well thought of at the time.

The statue on the top is looking a bit weather beaten, and I’ve always found it a bit amusingly classical, but I like the way it stands looking out to sea.

The four cannon at the base of the monument are from Royal Sovereign, Collingwood’s ship at Trafalgar. The second time I visited, for the 200th anniversary of Collingwood’s death in March 2010, they had somehow rigged them up to pretend to fire.

I love this next photo – the statue stands out surprisingly well from all around, because it’s at the top of a steep bank, but I just like the idea of Collingwood casting a long shadow on his surroundings!

I’m not sure why Tynemouth – it doesn’t seem to be personal connection, and part of me thinks that a memorial in Morpeth would be more appropriate (although there is one now) – but it does mean that there’s a wonderful view of the river, and the high and low lights (the old lights must also be in the picture, although they’re harder to pick out). And it also means that everyone entering or leaving the river has Collingwood watching over them, which I think was probably in the minds of the people who chose that site.