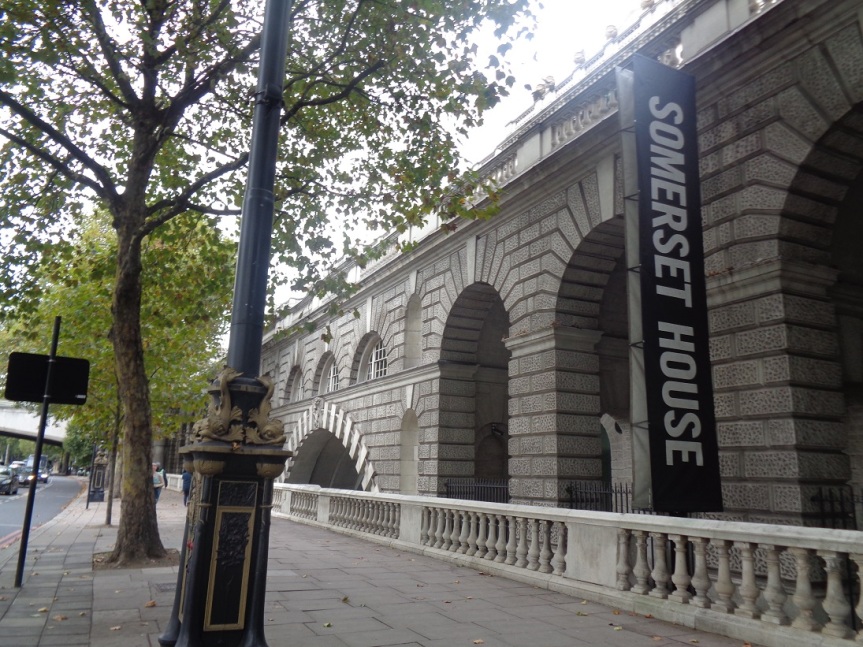 Somerset House was one of the places I went to on my first solo trip to London, nearly 8 years ago, although I can’t remember now whether it was somewhere that I’d planned to go (knowing that it was the base of the old Navy Board), or just an exciting surprise as I wandered along the river. I suspect the latter.

And I was back quite recently, killing time on the day I flew to Gibraltar – having come out of the Trafalgar day service with plenty of time to spare, I decided that I might as well go for a walk along the river.

The original Somerset House was one of the great aristocratic London houses by the river, and later a royal palace, but in 1776 it was rebuilt to provide a suitable home for various government departments which had been scattered over London.

The Navy Board was the administrative side of the navy – responsible for building and supplying ships and for the various dockyards, for pay, and for appointing warrant officers, with the Sick and Hurt board, Transport board and Victualling board under it – and often seems to have been at war itself with the Admiralty at Whitehall.

The Seamen’s Hall is still used as the main entrance from the river side, and when I first visited had portraits of several famous naval figures on its wall – I was sorry on my latest visit to see that they had gone.

Because the building was built for the purpose – or because its so close to the river, or both – there are watery images all over it. There are various river gods, but this one looks like it has to be Neptune himself.

At one end of the main building is the stair known as the Nelson staircase, originally the Navy stair, which leads up to the old Navy Boardroom.

The stair was destroyed in the war and rebuilt, so the lovely railings aren’t original, but they’re very nice just the same.

This month’s Collingwood Society meeting was the AGM, which means that there’s not an awful lot to say about it. Some of the talks for next year have been arranged, and some are still being worked on – the lecture in March will be on the Georgian merchant navy, and there will be a talk about smaller boats of the period, and possibly a visit to the Northumberland record office, where there is quite a lot of naval correspondence – and the members were asked to think of subjects they might want to contribute. Also the 2019 lecture is already organised, and will be on the Franklin expedition!

After the official business there was a quiz, which was good fun if a bit obscure.

This weekend I walked the first part of the Berwickshire Coastal Path, from Berwick up over the Border as far as Coldingham Bay (it got dark before I got to St Abbs), which took me back to Eyemouth harbour.

I don’t think I posted about this boat the first time I went to Eyemouth – I only had my tablet with me then, so could only take very bad pictures – so I was glad to see it still there, if not very much less confused about it than the first time!

There’s a bit of information on a website here – the boat seems to have once belonged to a training college in Blyth – but no one seems very sure how it ended up in Eyemouth.

Coincidentally, while I was on the train to Berwick, I came across a mention in one of Collingwood’s letters about the portrait of him which is at Paxton House (only about 5 miles from Berwick, but back over the Scottish border). Writing from Dreadnought in August 1804:

I hope Mr Home will send Sarah the picture from Paxton. It is a dead letter there, but she would like it. It is not a miniature, but a small portrait about 16 inches.

The Collingwood Society went to Paxton House a year or two ago – it’s an interesting Georgian house, and has other naval collections – but the first anyone seemed to know about the portrait was when Paxton got in touch, around the time the society was first set up, to say that they had a picture of Collingwood and didn’t know why!

I’m intrigued by the fact that the painting was already there at that point – I had thought that it might have ended up there after the death of Alexander Carlyle, who was both an uncle of Collingwood’s by marriage and some kind of connection of the Home family at Paxton, and who died around the time of Trafalgar.

Two Borders mysteries in one day!